Another Day – Another Concert

As you already know me so well, you know that I love going to concerts. It’s like food or the air I breathe, I need concerts to survive. I mean, how boring would life be without live music? Oh my god, I can’t even imagine. So dull.

So, in order to not let my life become some kind of boring or dull, I just had to visit another concert and thankfully Nothing But Thieves, one of my favorite bands, decided to pay us a visit. And holy moly, it was soooo amazing. I don’t even know where to begin, no joke.

But first let me tell you something about the band. I first got in touch with them about two years ago while dreaming about flying to the UK to attend Reading Festival – which my mum and I then also did, as you all know. I remember falling more and more in love with their music and their style and just the band overall. And when I finally saw them at Reading, I was head over heels in love with them. Especially with Conor, the lead singer. He’s literally the cutest ever and was so emotional at the show at Reading. So when they announced their European tour, I just had to see them again.

I am indeed a really really big fan of their music. They somehow sound like nothing I’ve ever heard before. And Conor’s voice is so damn unique, it’s fascinating. And they sound so damn good live, oh my god. I would say that they perfectly fit into the lane of music I love. They are a little bit poppy, a little bit slow, very emotional and deep when it comes to the lyrics and then suddenly they get all loud and heavy and full of amazing beats and guitar riffs. And all of that topped with Conor’s angelic voice. It’s literally everything I could wish for. So yeah, that special mix is really what gets me.

And exactly a week ago it was finally time to see them again. Crazy that it was only just a week ago, feels like it ages. The concert was in a pretty small venue in Vienna and completely sold out (props to them). I actually loved the venue, as it had stairs in the back so I didn’t have any problems with the sight. I hate when there are only tall people in front of me, I mean, I’m not the smallest person ever, but especially at concerts platforms come in pretty handy for me. And my mum was happy about that too. So thankfully we didn’t have to worry about not seeing anything.

So we got in and that first support act was already playing – a band called Airways, which  I funnily enough already knew beforehand, as one of their songs (it’s called “Mate”) is part of Spotify playlist. So it was no surprise for me that they were amazing. And then the second band came – called The Xcerts – and they were just as amazing as the first one. I really have to applaud NBT for picking such good support acts. They really were a perfect pick. And also the music they played before NBT finally got on stage. Two Door Cinema Club, Foals, The Killers – all the big hits to get us all hyped up. And it worked, I really have to admit.

And yeah, then they finally came and god, was I happy. The started off with “I’m Not Made By Design”, which was a perfect start. And then they basically continued playing all the big hits, switching between their old and new album and fast and slow songs. It was really really really amazing. I especially enjoyed “I Was Just A Kid”. I don’t think I never headbanged that much at a concert. I mean, I didn’t headbanged like you’re probably imagining it right now – but I did like the Laura version, the easy version. And I was soooo hyped up, holy moly. I screamed, danced, sang my lungs out and enjoyed every single second like it was my last one.

And as I already said, they were so damn amazing. They really are one those bands that sound like 100000000 times better live. Which is pretty hard if you know how amazing their albums sound. And Conor was so freaking cute. I could really see that he was really comfortable being there on that stage. I remember him being all nervous at the Reading show. And comparing it to last Friday, I really do get all proud inside. Because he and his band made so much progress in the last year and I’m so damn happy.

But what I especially love about Conor is his humor and his awkwardness. Like, he danced around and smiled and I enjoyed watching him with his bandmates so much. They really are an amazing pack of musicians. And you could sense that they love what they’re doing. Oh and I loved the part when it was just Conor on the stage, with his acoustic guitar that is far too big for his body, but let’s be honest, that just adds even more to the cuteness. He sang a cover of Tom Petty’s “Free Fallin'” and yeah, I of course teared up a bit. It was just too emotional.

And, of course, their last song “Amsterdam” really was one of the highlights. Until that point the energy had built up more and more and then when the song started it was ready to burst and it nearly blew the roof off, no joke. The dynamics was freaking breathtaking. We all jumped and screamed and sang and I felt so alive at that moment, I felt like the happiest person on earth. So I really have to thank NBT and their support acts for again creating a night that I will surely never ever forget. Thank you so much for making me so happy. See, that’s why I love music so much. It’s literally my happy place. 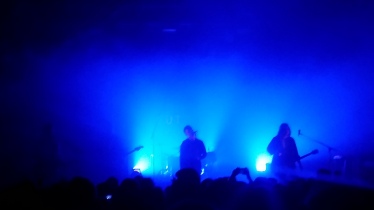 So yeah guys, there’s that. Another unforgetful concert and another story for me to tell and another reason for me to love music and concerts and bands. It all makes me so happy. And I really hope that you enjoyed this little post too. Please don’t hesitate to leave a comment down below. And, as always, I wish you all an amazing weekend and thanks for reading. x

One thought on “Another Day – Another Concert”