Brad Heaton – The Man Behind The Pictures

Welcome back to my blog. How are you doing today? I hope you all have had a great week so far. I’ve been once again jumping from one thing to another, like a ball in one of these old pinball games – from my job to the new role as editor in chief for LDN to the cat shelter I’ve started working for to the stuff I need to do at home and lastly to stuff I would like to do in my free time. I know, I already said it once, but I really enjoy it. I just feel like I would really enjoy a good holiday now. But that will come too.

Anyways, I hope you’re all great and excited for today’s post. For all of those who’ve been following my blog the past few weeks and have had the chance to check out the design I made for my own magazine ‘Lemon’ – click here – you will probably feel like this post seems a bit familiar. Because it is. For my mag, I wrote an article on Brad Heaton, the boys’ (Twenty One Pilots, ofc) official photographer, who I absolutely adore and admire. And as I love the piece so much, I thought it would be nice to upload it separately. Unfortunately, I couldn’t reach out to Brad to ask him for an interview, so I used quotes from past interviews and his Reddit Q&A.

I really really really hope you enjoy the piece. As always, please don’t hesitate to leave your thoughts and comments down below, I’d love to hear them. And, of course, I wish you all a lovely weekend and thanks for reading. x

The man behind Twenty One Pilot’s stunning pictures

To a gig, there are several parts that make or break a good concert experience and turn it into the special events we all know and love – the live music (obviously), the hyped crowd, the sometimes very pretty, sometimes a bit tacky merch and, last but certainly not least, the photographers. They are the ones running from one corner to another in the pit behind the barricade, hands stuffed with cameras the size of their own heads. And while we as the concert-goers usually overlook those busy bees, to the musicians and the industry they have always been a vital part. More often than not, the photographers and the artists build up a bond during the weeks or even months they spend on the road together. Their workflow changes and soon enough they become one. Brad Heaton and the oh so popular pop-rock duo Twenty One Pilots are the prime example for such a symbiotic relationship. Among the group’s fandom, the clique, Heaton has acclaimed a popularity status that could easily compete with Tyler’s and Josh’s, with fans greeting him at gigs all across the world and selling out thousands of his prints within minutes. For the community, there is no Twenty One Pilots without the beautiful shots by Heaton. But it wasn’t always like that.

“When I was playing in baseball tournaments as a teen, there’d be photographers taking shots. I’d always end up watching them instead of our games. That sparked the interest,”, states the Ohio- based photographer, “A few months later, my niece received a camera for Christmas. It was so neat that I told my mother, ‘I want something better than that’. It was partly out of jealousy, but luckily enough that first camera would transition into a full-blown career.” Having grown up in a blue-collar family and as the only not interested in literally climbing trees for a living, choosing photography as his future career felt like both an insane risk and the most exciting step in Heaton’s young life. It wasn’t until the age of 16 that he finally started shooting bands and artists, mushed in a local music scene that was packed with small venues and musicians trying to become the new real big thing. So instead of paying five dollars to be able to attend those gigs, Heaton decided to simply offer the bands his skills as a photographer. And back then, in an era when the internet had just started to flourish and MySpace had become the coolest platform on earth, having a few nice pictures on your band‘s page was definitely worth more than five small dollars. 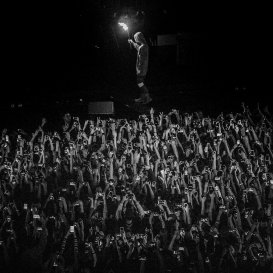 But it wasn’t until 2012 that Heaton finally met Twenty One Pilots – the band that would later lead him to a level of popularity and fame that only some of us can call their own. After Mark Eshleman, the band’s creative director and childhood friend of frontman Tyler Joseph, had introduced them, Heaton went on to shoot more and more of their shows, until he finally became their official photographer in 2016, which he still is today. Suddenly, he had gone from being a guy with a mediocre camera shooting his favourite bands from somewhere in the back of the pit to being the exclusive music photographer of the biggest bands of our time and one of the most admired artists today. There is only one thing that hasn’t changed – he’s still shooting his favourite bands. “I’ve always lived by the motto ‘you’re a photographer, not a fan’, just so I don’t distract myself with the celebrity status. But music is a different story entirely. I’ll get lost in the environment of a concert, but still do my job. That’s why I’m there.”

But in an industry that is nearly overflowing with talent and people trying to make it, sticking out of the crowd and making it to the top hasn’t been easy, but it seems like Heaton has achieved the one thing so many of us strive to get to – he has found his own voice in a world that is nearly deafening and has turned his photographic style into his trademark. He has made it, he has become one of the special ones. But obviously, that didn‘t come on its own. 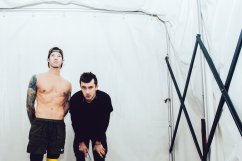 “I have never considered myself strictly a concert photographer. I’ve been well-rounded with photography since the day I picked up a camera. I started with darkroom and film photography, worked as a sports photographer, done studio work for some major brands, spent weeks studying light and compositions from films, created conceptual stories and narrative tales through photographs. I like to treat every single concert like it’s a sporting event. The shots of the players standing around are cool, but the photographs of the player making a diving stop at third base and tossing out the runner at first is the one that’s going to make the front page,”, explains Heaton while talking about what makes his shots so special, “I do my best to do something different at every concert. The more unique perspectives you’re able to tackle, the more your work is going to stand out.”

And truly, as crazy as it might seem, for Heaton, the shows can turn into sporting events really quickly. “During shows I think I run around 12,000 steps according to my iPhone. Add the weight of the cameras and it‘s quite a workout.”

not my picture; credits to Brad Heaton

The one thing that has made Heaton’s work shine like a bright star on a clear night’s sky is the closeness he has developed to the fans, and especially the clique. More often than not, the crowds and fans have turned into the photographer’s favourite objects to turn his lens to, which has sparked many different reactions and slowly turned into great story material: “If I‘m taking a photo of a fan, they see my camera, then completely freeze up and awkwardly smile. I think some of the most genuine photos are the ones where I can catch a fan completely enamoured by the show.” This is one of the reasons why his photos have become something like infamous artworks among the members of the clique and are lining the walls or radiating from thousands of phone screens of devoted Twenty One Pilots fans.

It‘s this mix of passion for photography, love for music and a huge amount of talent that has made Brad Heaton the popular, sought-after photographer that he is now, while he still stays the grounded, open person he has always been. Together with Twenty One Pilots, he has created photos that should rather be considered pieces of art and have become prime examples of the magic music photography can entail.

One thought on “Brad Heaton – The Man Behind The Pictures”