And welcome back to my week of music or the week where I went to two concerts in a matter of five days. As I told you guys in my last post (click here), the first concert I went to was Coasts + The Hunna and the second one was Kraftklub, a german band, which I’m not sure if most of you even know them or not. Anyway, it was a pretty crazy week and I’m so glad I get to share it all with you guys, so let’s get right to part two.

So, I think it would be best to briefly explain this crazy band called Kraftklub. When it comes to the german music market, they are a pretty popular band. I mean, the concert was sold out in a matter of weeks. And it was so damn amazing. I actually saw them first at the Sziget festival in 2015. I didn’t even know them before, but their concert was so fantastic and weird, I just had to see them again, especially as I completely fell in love with their music during the past three years. I would describe their music as a mix between rap  and indie-rock, so yeah, it’s pretty amazing.

In comparison to the The Hunna and Coasts gig, Kraftklub seemed like a completely different universe. The show was like ten times bigger and just the whole feeling was so different. But I loved it. I loved both concerts so freaking much.

And I have to say, Kraftklub really are a bunch of totally weird guys. I mean, at one point, during their second song that night, they just stopped playing. Like, they made no sound and stood completely still. I was like, what the hell is happening right now? And then, after a few moments, they just continued playing again. I don’t even know what they wanted us to do to make them start playing again. It was so funny. And then they came up with what they called the magic wheel of Dr. Destiny. Like, what even? Then they asked two guys from the crowd to come up on stage and just spin it. The clue was, that the wheel was made to decide what song they should play next. It even featured having a break for a smoke. Yep. That’s the kind of weird guys they are. Anyway, the guys spun the wheel and it ended up stopping at a cover song, like any cover song. What came next were basically one of the freakiest four minutes of my life. I don’t know whether I liked it or not. But what I can say is that it was crazy and I laughed a lot. It was pure happiness, actually.

The concert basically went on like that. Crazy chats during the breaks, a lot of jumping around and dancing, lots of laughs and even more singing and screaming. It was a trip, all in all. And I’m so happy that I got to see them again. If any of you ever get the chance, I highly recommend you giving them a listen. Or maybe even checking out some of their live shows on YouTube, they are really crazy, no joke. 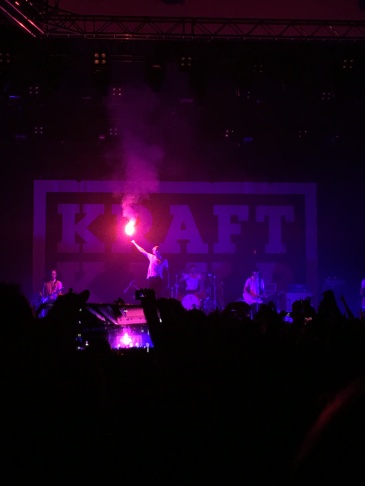 And yeah, that’s basically it. I really really really enjoyed the past week and yeah, what can I say? I just love going to concerts. God, I love music so freaking much. I have no idea what I’d do without it. I hope you guys enjoyed this little post and I wish you all a great week. And, as always, please don’t hesitate to leave a comment down below and thanks for reading. x