As you all probably already know, I’m completely addicted to concerts. The last concert I went to was on the 6th of February in Vienna with my mum. And as promised, here is my Twenty Øne Piløts concert experience.

First of all, I need to tell you that I’m still not over the concert and I think I will never be over it, like I’ll never be able to get over the Ed Sheeran concert of 2014. And I would seriously do everything do be able to go back to that evening. To be in the crowd, at 9 pm, waiting for them to come on stage.

It was unbelievably amazing and one of the best concerts I’ve ever been to – and trust me, I’ve been to MANY concerts. The thing is, there aren’t many bands out there, which are as special as Twenty Øne Piløts. Their music is breathtakingly good, even better live, which I thought couldn’t even be possible, and they created such an amazing vibe playing their songs on that stage. The crowd went totally crazy as soon as they got on stage and that didn’t change till the very end when Tyler and Josh let us scream and cheer for them for three minutes straight.

Besides that, I loved how they interacted with the crowd. They had some kind of metallic boards which they put directly onto the crowd, with Joshs drum set on it and Josh himself too, of course. The same with Tyler. That means the crowd literally held both of them while they were playing the songs. Incredible, right? And onto that there was this moment when only Josh was playing on his drums and everyone was looking for Tyler, who had apparently left the stage. So we were all looking for him. And suddenly everyone had this shocked face and people started cheering and I noticed that they were facing the back of the arena, so of course I turned around too and there he was. Standing on some kind of metallic tower right behind us all, in the middle of the crowd. It couldn’t believe my eyes, he was like 3 meters away from me. And he just stood on that little platform, with his ski mask on, rapping like a god. Unbelievable.

And of course they let us be their choir and sing for and with them. I felt so alive, screaming out the lyrics of some of my favorite songs with hundreds of other people who all admire the same two boys. I don’t even know what to say. I really wish I could relive it all right now.

They promised to come again and I really really REALLY hope I won’t have to wait too long to see them again. I can just give you all an advice – whenever you have the chance to see Twenty Øne Piløts live, DO IT. Even if you don’t like their music that much, just go to their concert. Really. You won’t regret it. Trust me. It will be one of the best evenings of your life and a night you will never forget.

This time I’m going to end my post the way Tyler and Josh ended the concert:

We are Twenty Øne Piløts. And so are you.

Thanks for reading. x 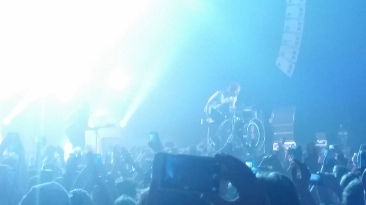